16 by pembsexile
Undecided at the moment but with those two chevrons on each shoulder it will be known as the Corporals kit!

17 by Kevinmoorefellover
I thought last season’s home kit was the most unremarkable in some time. I think this one has a bit more to it - I like it but can understand why it might turn some off.

18 by mad norm
It's neat,unpretentious,stylish and has my approval and it's Amber and black
I have spoke

Fu Ming wrote: June 28th, 2022, 10:11 am Whilst me might be small fry to Hummel compared to the number of replica kits produced for bigger clubs than ourselves, this should not prohibit Hummel or The County previewing the design.
A company the size of Hummel will have several marketing and design teams working with various clubs.
Our sales forecast would of been submitted or at least based on last seasons sales.
It is highly likely Hummel would of submitted several designs for our board to choose their preferred choice.
These manufacturing companies will have quite a few production lines running, whilst the likes of the Spurs line will be flat out, County's couple thousand will be produced easily in a day or so on limited production line.
Whilst or final sponsors on the kit may not be fully decided yet, it should not be a reason why the concept of the design cannot be revealed.

Hummel haven't made the Spurs kit for years. They're with Nike. Probably the biggest Premier League club on Hummel's books are Everton. Guess what? They're kit isn't being released until later this week.
I genuinely can't see any benefit in kit designs being revealed ahead of a formal launch. It's not as if revealing the design would make any difference to the final design or allow you to buy a shirt earlier.
Surely all it would do is open the floodgates for cheap imitations?

20 by Kevinmoorefellover
Replica kits are cheap imitations. They just happen to be £45.

21 by Chepstow'sFine
I really like it. It'll look good when we're 12 pts clear at Xmas.
Dogger
Dogger

23 by Percy plunkett
I like it,after some very bland shirts in recent years,this one is cool.Imagine amber shorts with that black pattern on the sides and it would have been stunning.They need a proof reader though,it said 57 Vans first of all.They also say there are two away shorts sponsors,surely one is the third kit.Anyway nice shirt.
George Street-Bridge
George Street-Bridge

We cancel each other out, then. I dislike the shirt but I'm pleased to see Farquaharson wearing it.

Seriously, I like the design and hope to get one.

27 by Kevinmoorefellover
The new home shirt arrived in the post today. I wasn’t expecting it until after the 27th July.

The badge is cloth rather than plastic 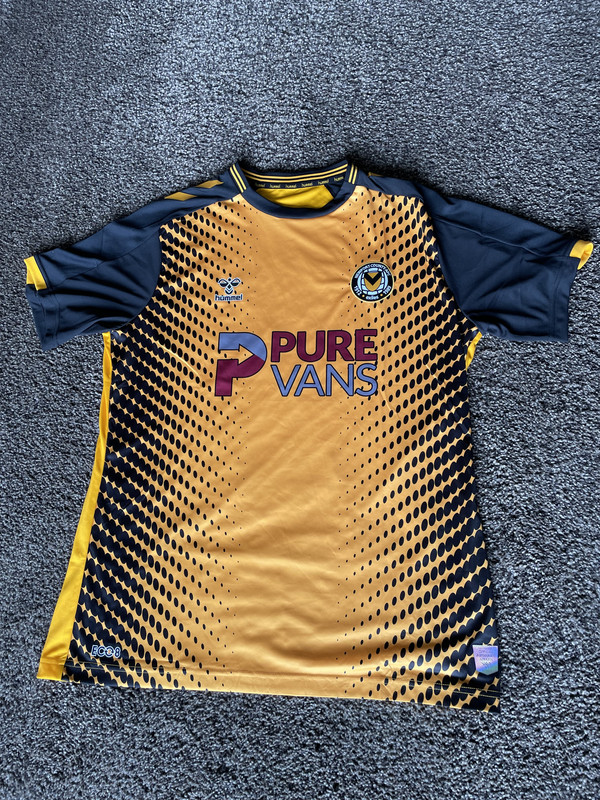 29 by Melling's equaliser
Replica kits were discussed on the BBC Radio 2 'Today' programme this morning.

Only 44 of the 92 'League' clubs had their new strips on sale before today. Those that didn't include Crystal Palace and Leeds United. Main reasons given were the early start to the season and manufacturer's having to produce the World Cup kits.
excessbee
excessbee

30 by excessbee
I asked in the shop on Saturday about availability of the second kit. Young lady said launched on Tuesday (both kits I think). However having read the piece on the BBC News website, that might not actually happen I suppose.
56 posts
Post Reply